With many schools beginning the 2020-2021 school year virtually, a lot of generous educators have been sharing interactive templates to use with Google Slides.  I have been bookmarking sites as I find them on Twitter, and I thought it would be nice to have a curated list here.  I am also sharing this link, which I think is a huge game changer, on how to update student Google Slide Decks after you’ve already shared them in Google Classroom.  (Video by Jessica Wilding)  Remember that you will need to make a copy of each presentation in order to use it and edit it.  Since there are a lot, I tried to put some examples next to each one to give you some idea of what is included in each set.

Let me know if you have any other collections that I should add!  Also, remember you can quickly make your own slides interactive by using one of my favorite tools, PearDeck!

Usually my posts are not about anything that most people would consider controversial.  I try not to sound “preachy” because I’ve been in the trenches, and I know that the majority of the educators are doing the best we can – but we all make mistakes, and we can certainly disagree on what is “best.”

I’m about to bring some hate down on me, and I know this because of a recent Twitter interaction, which definitely resulted in mixed responses.  But I want to clear the air of some misconceptions that I’ve been hearing lately, and this is the only way that I can think to do it.

I was listening to a podcast called, “Reasonable Doubt,” while walking my dog on Monday.  The show is hosted by Adam Carolla and Mark Geragos, and they discuss different current legal issues.  I find their comments intriguing, and they often open up my perspective on topics.  There are times that I don’t agree with what they have to say, but I enjoy hearing a variety of views, and they sometimes change my mind.

During the 3/28/2020 episode, the two hosts made a few comments about how teachers would be more willing for schools to open back up if they weren’t getting paid right now.  They suggested that teachers are not currently working, and that they are enjoying this paid vacation.  This was completely contrary to what I have been hearing from the teachers I know, so I decided to disagree with them in a Tweet:

@markgeragos and @adamcarolla I feel that you were unfair to teachers in your recent podcast. You stated several times that they were getting paid to not work right now, but I disagree. Most of them are working harder than ever and can’t wait to get back to classrooms.

Surprisingly, @adamcarolla responded with, “got it,” which is a nice way for him to say that I was heard, without necessarily agreeing with me.  Not a problem.

As one person replied, and rightly so, “You know most teachers?!  That’s a lot of people!”

I responded, “You are correct.  I should have said that as an educator of 29 years I know a lot of teachers, and many of them have shared with me the stress of switching their courses to remote learning, and that they miss face2face with their students.”

I’m a big Devil’s Advocate kind of person, so I often look at my own arguments and think, “What if I’m wrong?”  So, here’s the thing:  I understand that I’m in a bubble of educators who will, of course, claim they are working hard.  It’s probably not going to change anyone’s mind if we barrage social media with teachers protesting that they are working long hours, many of them also having to take care of young children simultaneously.  What I would like is for you to share this, and for anyone who parents a child currently involved in remote learning (or for any child who is old enough to respond) to tell us your perception of how hard (or not) teachers are working.  Let me know in the comments below, or let @adamcarolla and @markgeragos know (politely!) the level of effort you think teachers are making right now.

I wrote a descriptive post about Gimkit last year around this time after learning about it at TCEA 2019.  This online quiz game resembles Kahoot, but has some distinct differences which you can read about in my first post.

Since last February, I’ve used Gimkit quite frequently with my students in grades 8-12.  It hasn’t lost its novelty, and quite a few of my students asked for it every week.  In order to do this, I had to do something that I rarely choose to do with educational resources – I decided to pay for it.  (For a great explanation of why Gimkit has chosen to go this route instead of a full-featured free version with advertising, you can read this blog post.)

Why would I pay for something that is available in other versions for free?  Because this game is different than anything out there.  Not only do students get to “purchase” fun upgrades during the game, but those upgrades can change based on different game themes that the developer (a high school student!) provides throughout the year.  For example, “Thanos” was a such a huge hit with my students last spring that when it was offered again for a limited window of time I scheduled an unscheduled review game just so they could play.  And don’t even get me started on the buzz that “Humans vs. Zombies” created in my classes in October.

In the past year, the developer has:

Gimkit takes risks with new ideas constantly being rolled out.  In December, the company mysteriously touted a “Winter Challenge.”  I told my class we were trying it out, but that I had no idea what we would be expected to do.  I hit the button, and everyone’s screens went black.  The groans were probably heard downtown.  But then numbers started showing up on their screens, and it was clear that this was not a game glitch, that we were supposed to do something.  I had no idea what it was, but that didn’t matter.  The students started talking it out, and collaborating.  As they slowly figured out what was going on, it became clear that some leadership was needed.  Again, my presence was superfluous.  Natural leaders rose to the occasion, and with everyone’s help, the challenge was accomplished.

The Challenge wasn’t even part of my review.  (That began after they completed the Challenge.)  Instead of a waste of time, though, it taught my students so many things that I am constantly yammering about anyway – Growth Mindset, Collaboration, Communication, Perseverance.  Multiple choice quizzes are generally not very deep learning, but this Challenge threw problem solving into the mix, and that was a huge bonus.

Some of my favorite classroom memories have been made using Gimkit in the past year: students choosing wild nicknames so their classmates won’t know who to target, kids snickering as they “ice” each other, groups gathering around a few classroom monitors because they want to see how the champions fare against each other, cheers and groans when the “Thanos Snap” lists its victims, and everyone clapping when we finally solved the Winter Challenge.

I don’t work for them, and I get no compensation for writing this post.  I just really like what Gimkit does for teachers and for students.

As I mentioned in yesterday’s post, we have made some changes to our makerspace this year, one of them being to rebrand it as Zorro Astuto Studio.  Another major improvement we are implementing is a badging system for all students who create in Zorro Astuto.  Throughout grades 4-12 (all of the levels that attend our school on the Fox Tech Campus) students can earn badges when they reach certain criteria for each of three levels.  The criteria for Level 1 includes students getting a 100% on the relevant safety certification test and creating a project with that tool or software.  Levels 2 and 3 increase the expectations, and students who reach a Level 3 in any area will be prominently featured on our “Studio Masters” bulletin board, which is in the mall area outside our space.

Once a student earns a badge, we laser-cut a physical one using special acrylic from Inventables.  We provide them with a small chain so they can hang it on their backpack.

In addition, we wanted to digitally manage the badges.  Our intention is to keep a running record for students as they move through grade levels.  We also want teachers to have a quick reference.  This will allow teachers, when students ask to use Zorro Astuto resources (like the 3d printer) for projects, to know if the student already has experience or will need to spend time learning a new tool or software.

I researched many digital badging systems and ultimately decided that the Flippity Badge Tracker would best serve our purpose.  Although it is does not have as many features as Mozilla Open Badges or others, it does have simplicity going for it.  With as many students as we have going through Zorro Astuto, we needed something that would work with multiple users and could be easily accessed by teachers across campus.

Tomorrow I will talk about who comes through Zorro Astuto, and the many ways we are trying to make it a place where all of our learners have multiple opportunities to create. 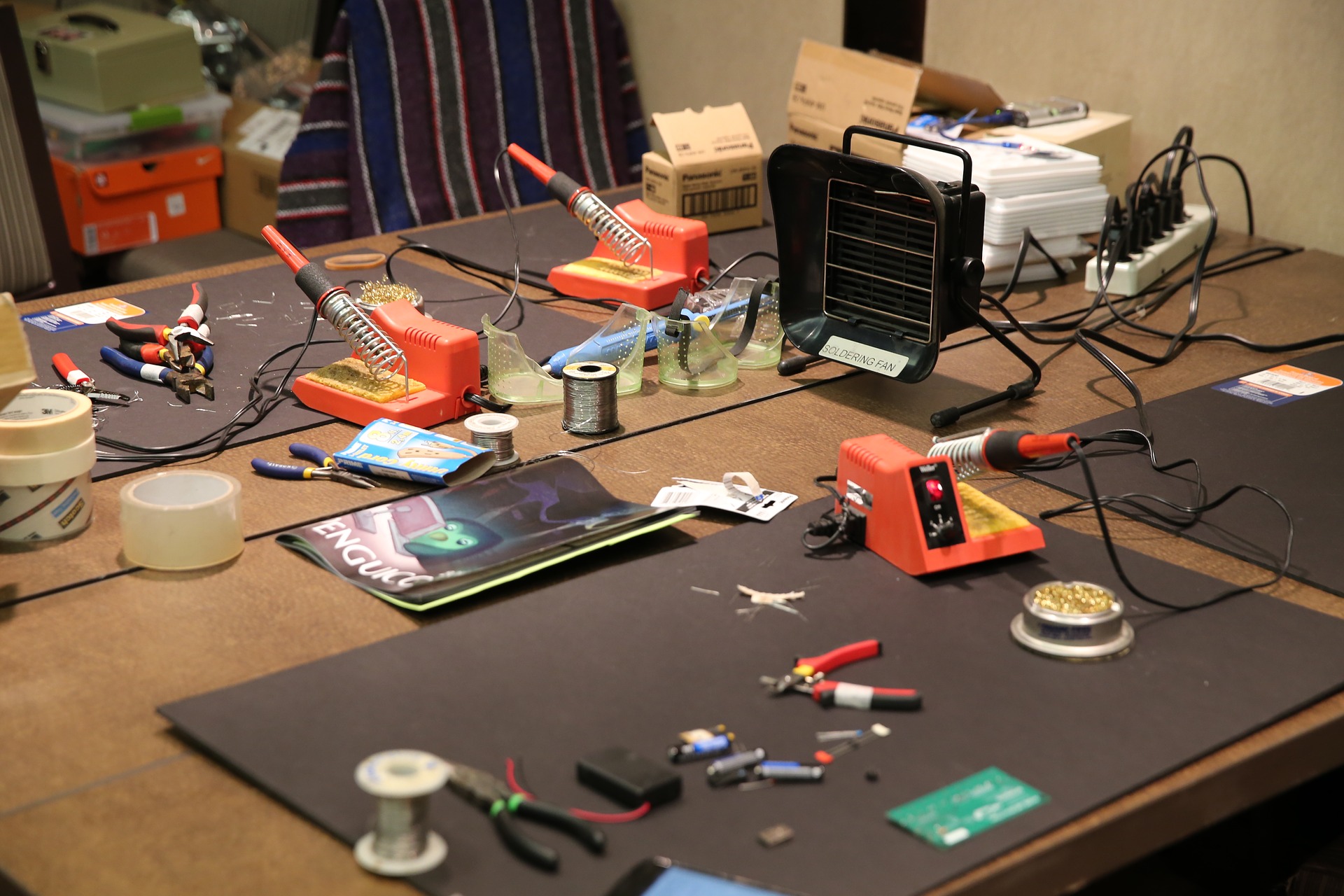 My colleague, Kat Sauter, and I teach in what used to be the Cosmetology classroom at Fox Tech High School.  In the newly formed Advanced Learning Academy (this is its 4th year), our room has become known as “The Makerspace.”  Kat and I felt like this generic term, which has come to mean many things to many people, did not quite fit our learning environment.  We set about to rebrand it.

The building where we are housed was named after the principal who was a strong advocate for technical and vocational education, Louis Fox.  In honor of him and our shared beliefs in hands-on, place-based learning, we decided to call our space, “Zorro Astuto Studio.”  “Zorro” means “fox” in Spanish.  “Astuto” means “clever or crafty.”  We think it fits our program perfectly.

After much blood, sweat, and possibly a few words of mild profanity, Kat and I got one room of the studio repainted before school started.  With the help of Kat’s sister-in-law, our larger room is almost done.  Students who used the space last year have been very complimentary about all of the changes we’ve made.  We  have several areas that showcase past student projects – such as 3d printed Fiesta medals, skateboards, and inspirational signs – but we are also trying to leave room for future ones as well.

So, what’s happening in this transformed space?  Stay tuned to this blog, our Twitter account (@StudioZorro), and our Instagram (@StudioZorro) for more on how our students in grades 4-12 will be using this space to create!

There are many tools out there for students who struggle with reading.  There were several I gathered at TCEA 2019 this year, and I have been meaning to share a curated list.  Here is a quick rundown (a big thanks to Leslie Fisher, who demonstrated these in her multiple sessions):

I hope at least one or two of these tools is new and helpful to you!

My Tweets
Happy National Poetry Month!
If you would like to see poetry resources to use in your classroom, click the button!
Poetry
Engage Their Minds
Proudly powered by WordPress Theme: Maisha.
Go to mobile version
%d bloggers like this: