Fish in a Tree, the awesome book by Lynda Mullaly Hunt that I reviewed here, has just come out in paperback.  The paperback includes the main character, Ally’s, complete Sketchbook of Impossible Things.  In honor of this, Hunt has launched a nationwide contest for students in 3rd-8th grades to create their own incredibly unique writing or artwork, photos of which must be received by May 12, 2017.  You can find all of the details, including the list of prizes, here.

Also, if you have time, Mrs. Hunt recently did a live webcast for School Library Journal, and I think that you can view the archive by registering here.  My 3rd graders and I watched it today, and found it very inspirational.  Mrs. Hunt talks about her own learning difficulties, the many real-life models for her characters, and how her long-term goals helped to keep her on track.  If you have spoken to your students about growth mindset and grit, then you will find her speech will really resonate with them!

In yesterday’s episode of TED Radio Hour, “Nudge,” one of the featured talks was by Reshma Saujani, founder of Girls Who Code.  In her TED Talk, Saujani speaks of our nation’s bravery deficit, saying that, “Our economy, our society, we’re just losing out because we’re not raising our girls to be brave.”

I listened to Reshma Saujani with interest, but froze when I heard her relate this anecdote from her experiences with Girls Who Code, “During the first week, when the girls are learning how to code,a student will call her over and she’ll say, ‘I don’t know what code to write.’ The teacher will look at her screen, and she’ll see a blank text editor. If she didn’t know any better, she’d think that her student spent the past 20 minutes just staring at the screen. But if she presses undo a few times, she’ll see that her student wrote code and then deleted it. She tried, she came close, but she didn’t get it exactly right.Instead of showing the progress that she made, she’d rather show nothing at all. Perfection or bust.”

The reason this example electrified me was because I had just witnessed the same phenomenon last week, but hadn’t recognized it.

During the “Undercover Robots Camp” session I held last week, the teams were tasked with programming their robots to “save” three plastic figures at various locations on the floor.  The groups immediately headed for the craft table to design augmentations for the robots to help pick up the plastic figures.

As I observed the groups, I noticed that a few of them felt the need to add more to their robots when they noticed their designs didn’t work.  They didn’t take things off – just kept adding things.  A couple of them began to look like robot anteater hybrids because the teams kept adding longer “scoopers” to the front, and I found it very intriguing that they never reflected on what might need to be changed or subtracted – just that they needed “more.”

Those groups, interestingly enough, were comprised almost entirely of boys (1 girl out of 7).  I had one all-girl group, who seemed to have the opposite strategy – do nothing.  They looked like they were doing something every time I strolled by the table, but nothing stayed on their robot, and they had not even begun the programming part of the task.

After a break, where I talked to all of the groups about really thinking about what might need to be changed instead of just randomly selecting new things to add to the robots, the other 3 groups took my suggestion to heart and began to modify their constructions.  The all-girl group continued to struggle.  I was concerned that they weren’t getting along with each other, and encouraged them to discuss their ideas, or maybe delegate tasks.   Nothing I could say seemed to help, though.

When time was up, the girls had nothing on their robot, and only a few lines of code.  I felt like I had failed in helping them, and I’m sure they didn’t feel too happy, either.

All weekend, I wondered how I could have handled the situation differently.  And then I heard Reshma Saujani.  I realized why my advice to those girls had been useless; I wasn’t addressing the real problem.  Although communication may have been a factor, the true issue was that they just couldn’t figure out how to do the task perfectly.

Now, I don’t believe that every girl strives for perfection and that boys never do.  But I have seen students of both genders who don’t know how to adjust to making mistakes; they treat errors like kryptonite.  As Reshma Saujani states, it is quite likely our society contributes to this type of mindset in girls – particularly by raising boys to be “rough and tumble” and girls to be “safe.”

If I could rewind back to last Friday, I would sit with those girls and ask for their ideas.  I would ask them to choose one to try, and we would try it together.  We would reflect on it afterward and make some changes to make it better.  I might even tell them about Reshma Saujani’s talk, and ask them what they think.

Just to be clear, I am not advocating for us to teach children to deliberately make mistakes or fail.  What we need to do is to teach them to deliberate thoughtfully, and to learn from imperfection rather than to be paralyzed by it.

Class Dojo recently released a series of Growth Mindset animated videos that are great for elementary school students.  Last night, Season Two’s first video was published – “Katie Discovers the Dip.” Season Two continues to teach about Growth Mindset, showing students how to use a Growth Mindset to deal with disappointments and challenges.  For all of the Class Dojo Big Ideas videos as well as discussion guides, click here.

As some of you know, our school has been doing a Parent/Teacher book study on the book Mindset, by Carol Dweck.  I am reading the book for the third time, and I am still finding parts that strike me differently depending on “who I am” when I read it.  As a teacher, a parent, a wife, and a sometimes leader, I recognize different pieces of myself, my husband, my daughter, and other people I interact with on a regular basis.

There is so much to gain from reading this book.  However, I know not all of you have the time to do this.  You can get a sense of its message by looking at our Smore Book Study posters.  These include links, quotes, videos, and more.  You can also access more resources on my Pinterest Board.

These are the main things I have learned from the book that have impacted the way I teach and how I raise my child:

I’ve seen true differences in my students and my daughter since I began to apply the principles I learned from Mindset a few years ago. I encourage you to read the book and put it into practice, too.

I love StoryCorps, the oral history project that has recorded over 50,000 interviews since 2003.  You can listen to many of these interviews on their site, and you can also view some that have been transformed into animations.  One of my previous posts was about one of these animations, “Eyes on the Stars.”  (Not all of them are appropriate for all age levels, so please preview before you show them to students.) 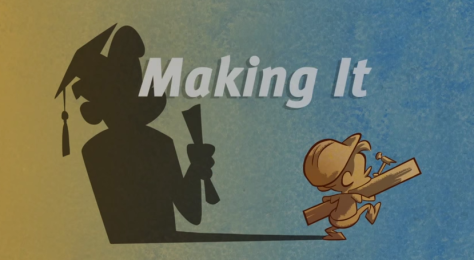 “Making It” is a relatively new addition to the site (September, 2014). This dialogue between a young man and his high school teacher is very inspirational.  It’s about hard work and perseverance – and making your mom proud.  For those of you who like to teach your students the value of grit, this video will support that message very well.

If you would like to find more Inspirational Videos for Students, check out my Pinterest Board here.

Sometimes, like the main character in The Dot, we are paralyzed by the worry that we can’t do something well enough.  And other times, we try to do something well and are devastated when it doesn’t go the way we planned.  Beautiful Oops is a book by Barney Saltzberg that encourages us to make the best of our mistakes.  It is a great book for younger children – full of interactive pages and colorful pictures.

While I was looking for resources to accompany the book on the web, I found a great Pinterest Board from @KirstyHornblow that is full of ideas to go with the book.  For example, I am totally going to try the lemon juice/watercolor idea from artprojectsforkids.org.

Beautiful Oops is a nice way to talk about Growth Mindset with young students, and I am definitely going to add it to my Growth Mindset Pinterest Board.

By the way, I added a few extra resources to that board this weekend, including several that I found on Larry Ferlazzo’s site.  The one below, tweeted by @BradHandrich, fits the theme of this post quite well!